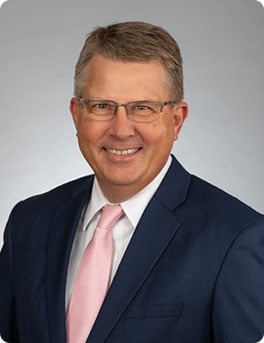 Robert Seidel joined Carolina Family Estate Planning after years of exemplary work as a General Counsel for dozens of businesses of all sizes. He’s handled almost every conceivable aspect of business law including litigating complex and diverse issues, but what caught our eye – it was impossible to miss, actually – was his extensive work designing and implementing estate plans for a mindboggling cross section of clients.

But, that’s not why we asked him to join our firm.

This is why: Robert’s mother tells everyone Robert was six when he told her he was going to law school. Robert replies, “That’s absurd . . . I was at least eight.”

After you talk to Robert about the law for more than ten minutes or so, you’ll side with his mother. Robert grew up in a small town, Marshfield, almost dead center of Wisconsin. It’s farm country but boasts a renown cardiac center downtown. It’s a town of farmers, doctors, hospital administrators, and workers. That’s an important piece of Robert’s story, from a very young age he grew up with the overpowering sense that “things just didn’t fit right. A few people wielded all the power, they bullied the rest.”

The way to fight that, Robert was convinced, was ‘to know stuff.’ To know more than the bullies, use it to stand up to them, use it to ‘look out for people.’

So, law school was the way to go. Becoming a trust and estates attorney was cemented while he was attending St. Norbert’s College. His grandfather passed away, the family was not close, the lawyer handling the estate had a will reading immediately after the funeral.

Robert’s most charitable description of the lawyer is ‘bumbling.’ His reading of the will, interrupted by heated arguments that anyone would have seen coming, and was 'horrible.’ The lawyer explained nothing, had no answers to any questions, ceded control of the room seconds after he started, and ended by suggesting that all the at-each-other’s-throats family members get together to pay off a $10,000 estate debt before moving forward. Robert didn’t know much about estate law at the time, but he knew enough to tell his father not to even think about it. He was sure it wasn’t how estates were supposed to be managed and he was right. He was also sure that that sort of thing happened every day.

By the time he entered the Hamline School of Law in St. Paul, Minnesota, he knew exactly what he wanted to do for the rest of his professional career.

Robert lives in Durham with his wife Ann where they were making plans about how to spend their free time with their two adult children, Laura and Jeff out of state when Ann discovered bridge and shared it with Robert. When he’s not practicing law and playing bridge, Robert, self-taught, plays the guitar. Ann and Robert camp and white-water raft, but make sure to take a deck of cards along.

Robert retired from Carolina Family Estate Planning in 2021 in order to spend more time with his family. At Carolina Family Estate Planning, we use a team approach to our planning so the rest of our team, including our other wonderful estate planning attorneys are ready, willing, and able to assist any of Robert's clients or their families as needed.