Over the past month or so we've seen incredible, fast moving wildfires in California and a major earthquake in Alaska. Two events that came out of nowhere, disrupting everyday life in a heartbeat. 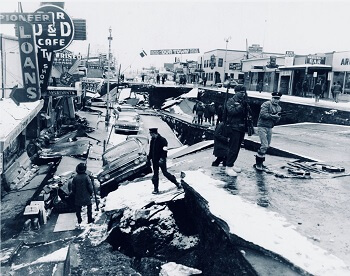 Events like these can split families, however temporarily, in the chaos that immediately follows - or, in the case of the wildfires, chaos from beginning to end as the flames moved like out of control locomotives and the people in their path had to grab what was at hand and flee.

At one point during the fire crisis, there were thousands of missing people, mostly because cell towers were down, the area effected was vast, power was out, people were in headlong flight.

Families were and remain separated while they rebuild. In many places, parents are camping out in tents while their children stay with friends and relatives who weren't burned out. Needless to say, they are lucky, despite all.

For every parent out there, it’s easy to see that this could have turned out badly. It’s bad enough children are still separated from parents, that things like medication, education, special needs, medical issues, have now become incrementally more difficult to take care of on a day to day basis – you never know how many times a parent is needed to sign for or authorize something for a child until the parent isn't around.  It’s so much worse when the unthinkable happens and the parents are gone … for good.

The only thing worse is when no planning for the children has been done.

We’ve been creating Children Safeguard Plans for years now. A comprehensive outline of your wishes for your child, tailored to your individual needs, with more – much more – than documents. We include emergency plans – like where to meet if, say, a massive fire separates the family; ID cards that include each child’s emergency contact information; and other emergency preparedness planning tools. It also provides baby-sitters, caregivers, emergency personnel, and loved ones guidance on what to do in an emergency if you're not there.

Planning. For the worse.

Here’s a curious fact. In the California region that just weathered the Camp Fire, whole neighborhoods were leveled … for the most part. Many still had one or two houses left standing surrounded by a sea of ash. Those houses had been built – and maintained – to withstand the wildfires that had been, for years, predicted to come with greater and harsher frequency. On average, regardless of the size of the house, those measures cost less than $10,000. Though the maintenance – such as pairing back non-fire-resistant trees and raking up pine needles, has to be continually performed.

And the Alaskan earthquake that had few injuries? Well, Anchorage had a horrible earthquake, followed by a tsunami, in 1964 that destroyed a vast chunk of the city. Anchorage rebuilt, but with some of the strictest building codes in the world. It was ready for the 7.2 earthquake it faced a few weeks ago. Life went on.

What Our Clients Say...